So let’s talk about some of the people I find beautiful.

I know I have a few readers who use screen readers and I’ve been trying really hard to do better image descriptions, if any of y’all have suggestions as to how I can do better PLEASE tell me. I’m very not confident that I’m doing them right. 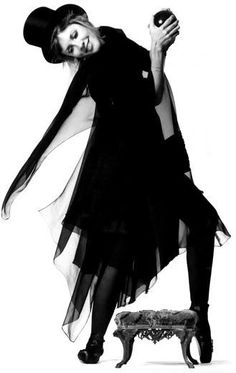 [image description: Stevie Nicks in a black and white photo posed as if dancing. She is wearing a tophat and sheery layered dress]

Okay, my first Goth flavored love was Stevie Nicks. Y’all, I cannot tell you how many times I was buck naked draped in a blanket spinning and caterwauling Rhiannon or marching to Tusk. I’ve always found her mesmerizing and occasionally to this day I will put on a shawl and spin.

Next up, Sigourney Weaver from Alien. Yes, I probably shouldn’t have seen that movie so young but I did and frankly between her and the Xenomorph queen well….here I am. Between Ripley being the most bad ass woman I had ever seen, her angular handsome face, and how unglamorous she was and so focused on ass kickery- y’all. If I wasn’t pretty fuckin queer at birth I will say that Ripley made me. I mean- 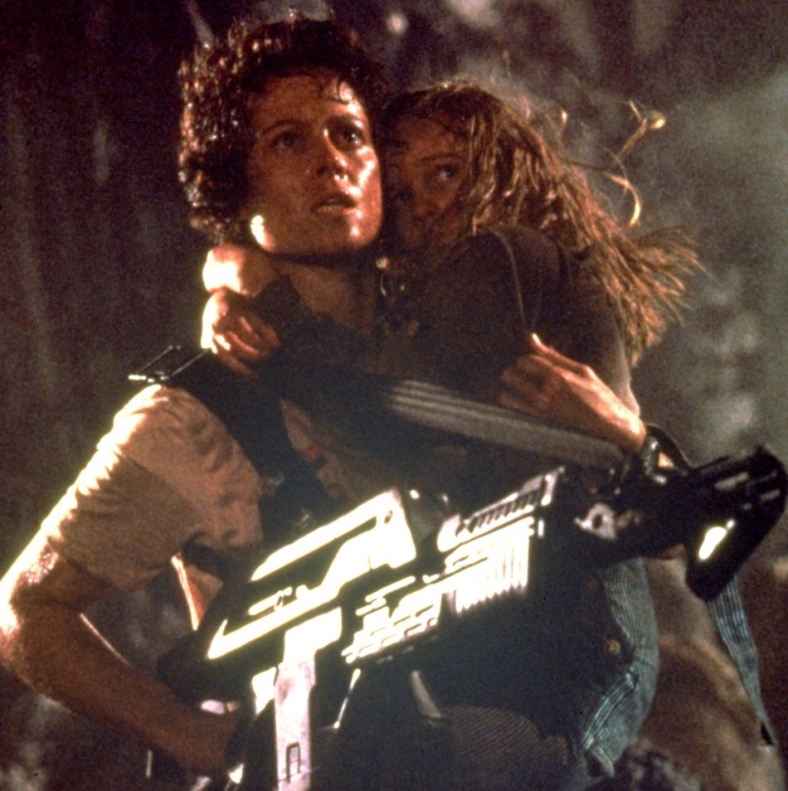 [Image description: Sigourney Weaver with short brown hair, holding a child in one arm and a large gun in the other.

Looking back, I both wanted to look like Ripley AND be rescued/loved by her. 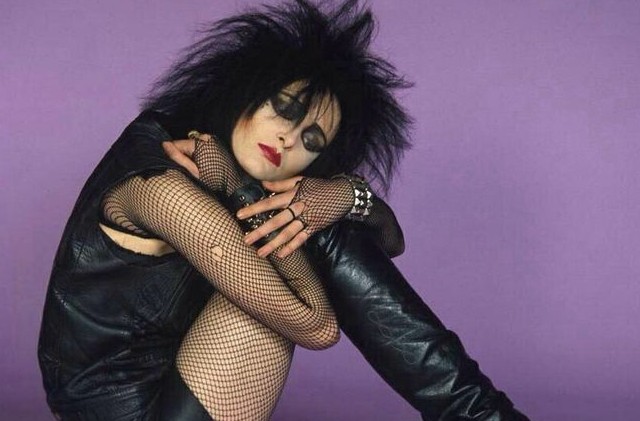 [image description: Siouxsie Sioux sitting, she has on fishnet hosiery, tall black boots, black shorts and a black vest. Her hair is big and teased, her eyes are close.

Siouxsie Sioux. I mean. I’m a Goth you knew what it would be. I remember seeing a poster of her in my punk babysitter’s room and instantly was in awe. The sharpness of her make up, the red lips, the eye. It was everything I wanted. I fell in early and deep love with punk and goth folks because I love me some dirty not pretty/pretty glamour. Give me grimy. The torn tights, the smeared eye-

I had no chance.

Nothing could have stopped the Gothness.

Now, rather than load up eleventy million more photos, y’all get my drift and I’ll leave some names at the bottom of this entry.

From a very young age, say about 5-6 I understood that I couldn’t be as glamorous as any of the people I found beautiful. I was dark (way darker than I am now) and small and chubby. I had an awareness that dark chunky little Shannon did not exist within the framework of white and pretty.

I couldn’t have said that, but I understood it. What I find most interesting about it is that, it was really just a thing I settled on and didn’t dwell upon. I didn’t know yet to feel bad about it, it was just a thing and I dealt with it. So, I played dress up and I spent HOURS putting on make up when someone let me, and hours studying the walks and poses. I remember once sitting in a makeup artist’s chair while my Mom was getting her hair cut so she could do some headshots for a salon and I sat with a fashion magazine and carefully duplicated a look.

The make up artist was so pleased and I loved it so much. He was pleased that I didn’t make a mess of his stuff and that I was so quiet and glamorous. I remember how good it felt to be acknowledged and seen that way. These days I’d equate it to the moments when other Femmes and I give each other the, YASSS BITCH nod and understand we’re being pretty gay with each other.

It’s the same feeling when friends post thirst trap photos and I can say LOOK at that ass and everybody knows what it is. It’s never gross or whatever because we trust each other to see each other.

When I got to about the 5th grade, then I started to feel bad for not being White nor pretty. I started to equate White and Pretty with value as a human being. That was reinforced by living in America and being one of very few Black kids in my community. I had no mirror for myself. That is when I started to really internalize ALL the anti-Blackness.

Shit is fucked up.

Around that time I also decided that my interests in alternative style was bullshit and stupid because there was no WAY I could have ever subjected people to my fat Black ass in clothes meant for Thin Pretty White girls. I would have told you at the time that I just wasn’t interested, but wouldn’t have been able to articulate why.

That was a burden I carried early.

Outside of my bedroom dress up (which I did and still do to this day) at the time I did not let my real tastes be known. Year’s at home by myself, I learned to wear forty pounds of black eyeliner by the time I was in the 8th grade, but I wouldn’t dare do it out of the house. Parental objections aside, I just didn’t believe I was allowed to engage with fashion or beauty that way.

Through high school beauty became a painful thing for me. I couldn’t buy make up because there wasn’t brown make up for me to have access to, I was just baby woke and just learning about feminism so I decided that I didn’t need it and was weak and anti-woman to want it.

I didn’t because I was of course ALL wrong for all of that.

Later I explored a bit more. I decided since I was fat and ugly anyway, I’d just wear what the fuck I wanted to wear. I wore a lot of glitter on my face, and a lot of costume jewelry, and a lot of masc thrift store vintage clothes. I wasn’t feeling brave but, like I wanted to shock people with my body.

There wre years at the time where I was very uh, self destructive with my beauty and aesthetics because I could not realize that I did deserve them and that I could engage with beauty. Shit was hard.

As I got older, I started working it out. For a few years I was the wears ultra minis and vinyl in the daytime type Goth. I was a fancy Goth for a minute. I gave it all up and wore khakis and sports wear for a couple of years (that was awful) and through my mid-20s I was perfecting my casual Femme office gothness.

Let’s wrap up here for now. Y’all see where it all started.

Next time we talk my tastes, I’ll show y’all what inspires me on a fantastical level.

This site uses Akismet to reduce spam. Learn how your comment data is processed.

Support my writing/art on Patreon!

Join me using Ibotta for rebates!!

Get money back while you shop using Ebates!!